This was an old, worn tram in a field in County Cavan. He had an idea for the tram. He saw a buzzy, busy café, filled with good food, nostalgic 1920s music, sunshine and laughter. He set about finding a builder to restore the tram to its former glory, and a location to showcase its beauty.

Restoration of the tram, and finding a home in historic Wolfe Tone Square in Dublin 1, took almost three years. Dave and John tendered to Dublin City Council for the opportunity to locate the tram in this historic part of the City Centre. Because of the unique sensitivity of the location as a former graveyard, archeologists were employed during the installation of services. The tram itself was completely refurbished off site. It was lifted into position on a Sunday, and opened for business on Monday.

The tram was built in 1902 by brill in Philadelphia. It spent most of its working life in Lisbon, Portugal. It spent some time in a museum in Colwyn Bay, Wales, before being sold and somehow ending up in a field in Mullagh, Co. Cavan. The tram has now entered a new phase of its working life, as a café. Beautifully restored, softly lit, it is both quirky and nostalgic. services for offices and events. 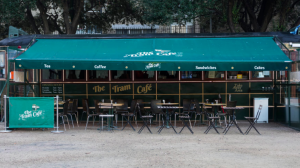 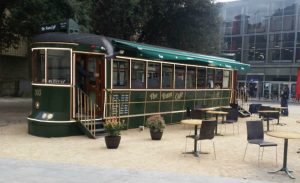 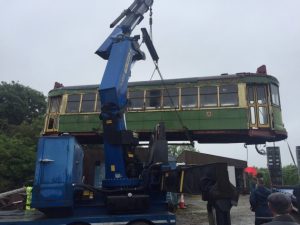 PreviousPrev Project
View all View all